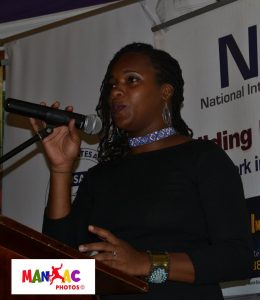 Its with great pleasure that the Board of Directors of the Forward Step Foundation announce the appointment of our new Executive Director Ms. Latoya Fry Effective February 1, 2018 Ms. Fry will officially take on the role as Executive Director, ‘womaning’ the continued growth and expansion of this 11 year Foundation.
Ms. Fry is no stranger to the Foundation’s mandate and continued mission, she formally joined the entity as a Board Member in 2009 and since then has played a key role in its growth, development and evolution.
In 2015 she was appointed Social Enterprise Manager, it was there that she injected the new era for the Foundation, some noted highlights under her portfolio were:

Again join us in congratulating Ms. Latoya Fry on her appointment as Executive Director of the Forward Step Foundation. She has and will continue to do us proud.